Sunntics’ mission is to make CSP competitive by providing the first integrated commercial toolset for optimised design and operation of CSP plants. Our toolset helps drive LCoE down. It enables all parties involved in the project life cycle to create optimised solar field designs, optimise solar field operations, and assess expected plant performance at all stages of development.

Concentrated Solar Power is a utility-scale power generation technology. The use of thermal storage makes it dispatchable and hence complementary to solar photovoltaic (PV) generation. CSP is an increasingly important part of the generation mix in sun-rich countries. The International Energy Agency forecasts that it will account for 11% of world power generation by 2050. But to do so it must be competitive.

This toolset is a game changer. The creation of CSP tower plants is still an immature market. Up till now there were no commercially available tools to optimise the design and operation of a tower plant solar field. Large design margins are thus often employed to achieve warranted performance. This practice leads to over-dimensioning and lack of balance, and hence to higher Capex and Opex, giving a Levelised Cost of Electricity (LCoE) that is higher than it need be. Our toolset helps developers and engineers create highly competitive plants.

Getting the full potential from capital spend on CSP

CSP will play an important role in reaching the 2050 decarbonisation goals. IEA estimates 11% of global electricity generation will use CSP. However, built-in storage, balancing intermittency and continuous supply only gets CSP technology so far. So, we aimed for a target not seen in other renewable energy systems: accelerated optimisation at an early stage of industry maturity.

To solve current and future CSP challenges, drastically improve performance and disrupt conventional wisdom, we have redesigned CSP design and operation from the inside out. The result? Two SaaS products we’re incredibly proud of.

SunnSaaS for AI-based optimised design and assessment of CSP projects

SunnSaaS workflow for a Feasibility Study 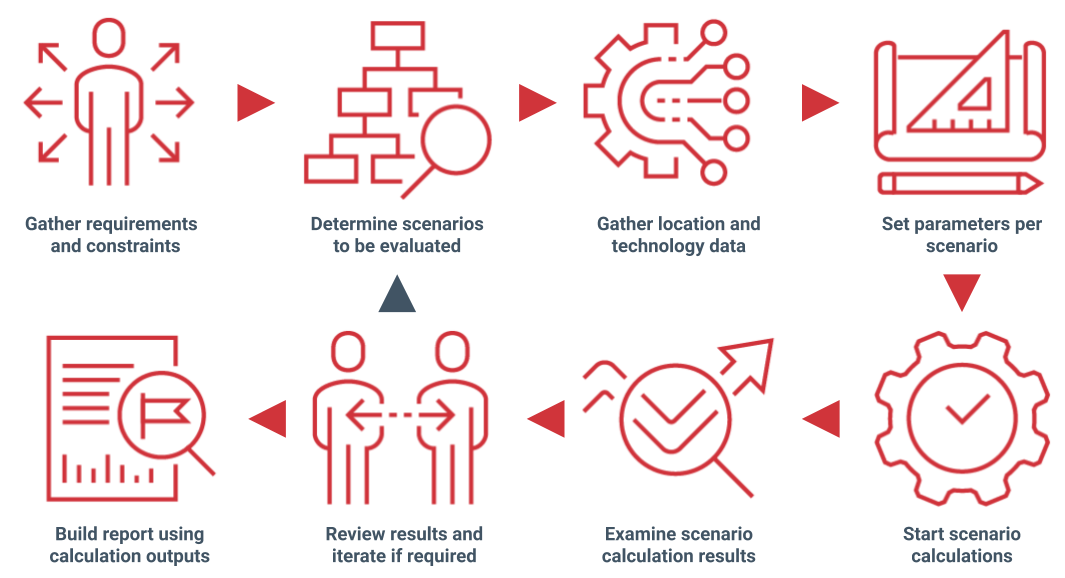 SunnSaaS for Sunntics is a browser-based tool that provides accurate results fast.

Its core is a set of algorithms that optimise CSP tower plant design and operation to minimise the Levelised Cost of Electricity. The algorithms use Artificial Intelligence techniques and scalable cloud computing to create optimal designs for multiple scenarios in parallel.

SunnSaaS produces clear, easy to read graphics and overviews that can be incorporated directly into a report, as well as comprehensive outputs that can be fed into other tools for further processing.

Maximum leverage from your scarce resources

Sunntics’ SunnSaaS toolset was used to support a re-evaluation of the solar generation mix in Saudi Arabia, in co-operation with the King Fahd University of Petroleum and Minerals. The study compared the yield and costs of three solar generation technologies (PV, parabolic trough and tower) at three different locations in Saudi Arabia with different meteorological characteristics and with differing amounts of storage. Each plant had a nominal rated capacity of 150MW.

The study showed that while PV is the cheapest technology if storage is not considered, it becomes steadily less attractive as storage is added. In contrast, a CSP tower plant is the most expensive option if it has no storage, but it is the cheapest option if 9 hours of storage is required. The implication is that it is worth reconsidering the relative share of PV and CSP in the 2030 plans.

The graph charts Average Load Supply Factor (ALSF: a yield measure) against the Levelised Cost of Electricity (LCoE) for the three technologies, with differing amounts of storage, at Tabuk. 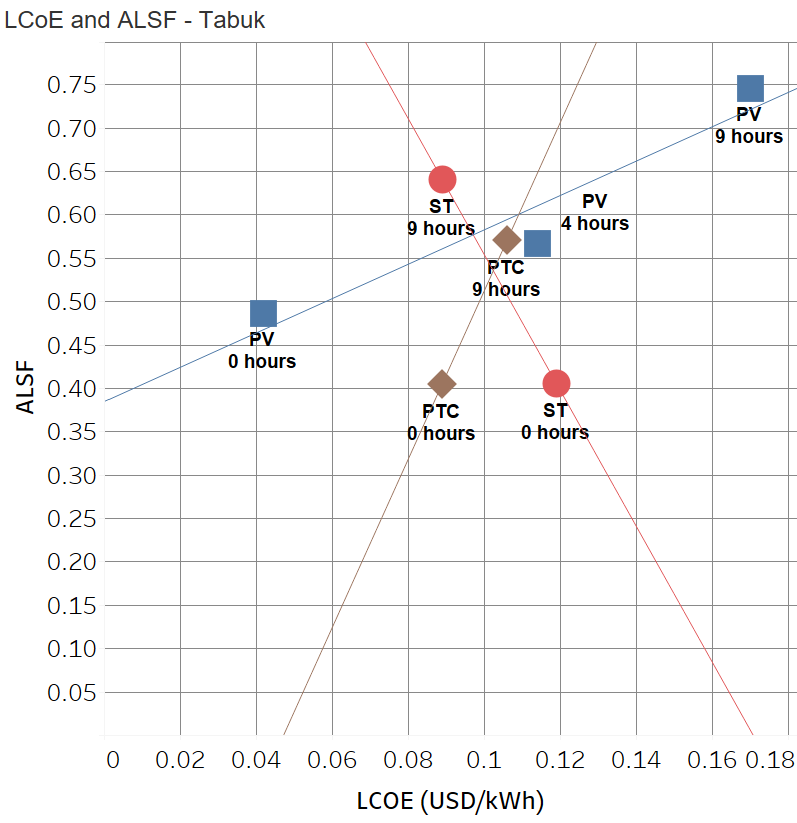